Octave Registers and the Piano

Musical notes can be organized according to the particular octave register they’re in, as we learned in last lesson. In this lesson we’re going to dive a little deeper into the concept of octave registers.

Now we’re going to learn how to organize and visualize the various octave registers in our minds, and also find out what each of them sounds like. This is a big piece of the puzzle. Once we’re through with this lesson, we should have a much stronger grasp on how the piano keyboard, and musical notes in general, are organized. The huge sea of notes will be neatly divided into sections, and the intimidation of the 88 keys will start to slip away.

The 7 Octave Registers of the Piano

All the notes on the keyboard can be divided into 7 octave registers (plus a few extra keys on either end). In order to get familiar with each register, we just need to know 2 simple things about each of them:

1) Its placement on the keyboard

Let’s take a look at each of these, one by one.

Octave 4 is smack in the middle of the piano. Its notes are medium in pitch, not really high and not really low. Here’s a simple melody that we will use to illustrate and compare the sound of each octave register, starting with Octave 4:

Octave 3 is one octave below Octave 4, and its notes can be described as moderately low (somewhat low, but not very low):

Octave 5 is just the opposite, one octave above Octave 4, and its notes are moderately high:

The following chart shows our first three octave registers at a glance, including each one’s name, the notes that make it up, order, and description:

So far so good?

Octave 2 is low sounding (not earth-shattering-ly low, but very low).

Octave 6, on the other hand, is high (again, not ridiculously high, but very high nonetheless).

Octave 7, way over on the other end of the piano, sounds extremely high:

Let’s Sum It Up

The chart below sums up all the info for all 7 octaves: 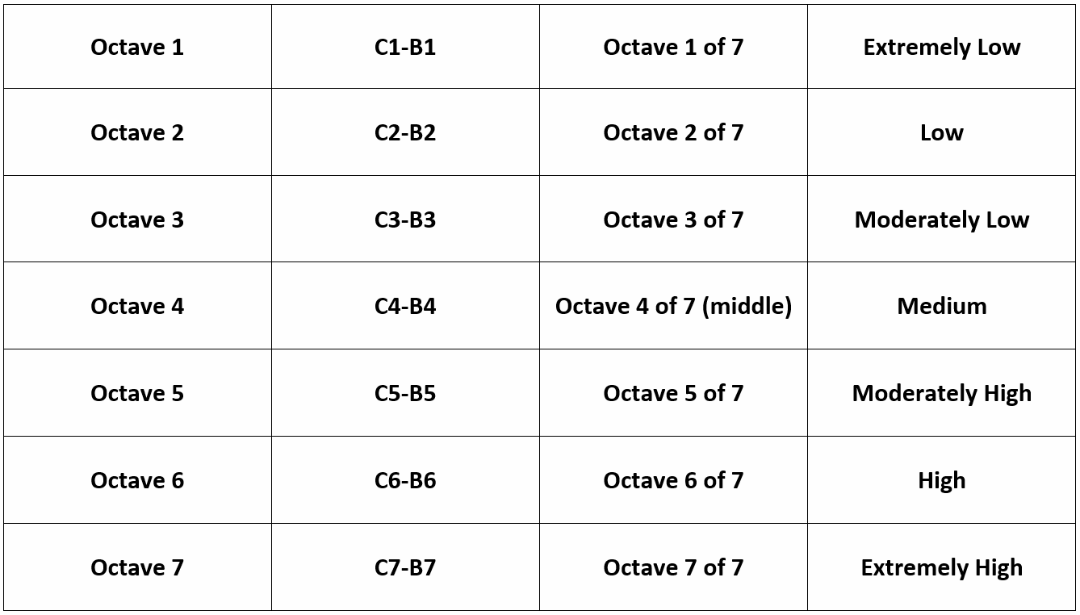 Here are all the audio examples in one place, so you can easily compare and become familiar with the sound of each octave register:

This is a simple but very effective way to think about octave registers. Each note belongs to its own area that we can picture in our heads, and we can also get a sense of how high or low in pitch it will sound even before we actually hear it.

Wait, what about those notes at the bottom and that note on top of the piano? Oops, almost forgot about those. The truth is, the piano actually extends slightly beyond the 7 octave registers we’ve been talking about so far:

On the low end, we have A0 and B0. Technically, they’re part of a new octave register, but practically, just think of them as an extension of Octave 1. A few extra notes never hurt anybody.

At the upper end, the very last note is C8. Again, we can just think of it as one extra note added on to Octave 7.

There are actually technical names for each octave register, such as contra, great, small, etc.  But these aren’t used very commonly anymore, and that’s why we’re leaving these out completely. It’s easier to just remember the octave number, along with the description of pitch (medium, moderately high, etc,). If you do feel the desire to learn those traditional octave names, though, go right ahead! You can find a detailed description here. 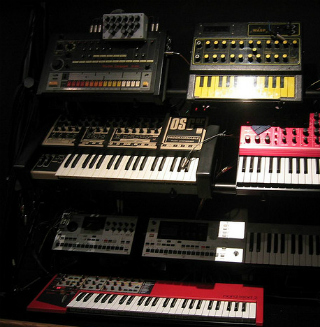 How do we identify the different registers on these smaller keyboards? Also, we’re obviously not getting the full range of notes, so exactly which octave registers are they giving us, and which ones are they leaving out?

Well, the first step is to find middle C. Almost always, you can assume middle C will still be the closest to the middle of whatever keyboard you’re using. Since the lowest and highest octave registers are generally used a little less frequently than the middle ones, those are the ones they leave off of the smaller keyboards.

So for example, on a typical 49 key synthesizer, the lowest key would usually be C2, the highest is C6.  Octaves 1, 6, and 7 are completely missing. So that leaves us with four octave registers,  Octaves 2, 3, 4, and 5, the most used registers on the piano. And C4, middle C, is still pretty close to being smack in the middle of the keyboard, as in the picture below:

The same logic will work for keyboards of other sizes like 76, 61, and 25 keys. Simply find the C closest to the middle, which will almost certainly be middle C, and then work your way outwards toward both ends of the keyboard to see how far up and how far down it goes.

But what if we do want to play those really low or really high notes? Have no fear; we still can. For this purpose, there are usually ‘octave’ buttons on the keyboard that allow us to transpose the entire keyboard up or down by an octave.

So for example, if you press the ‘Octave Down’ button on our 49-key synth from the previous example, the keyboard range will now be from Octave 1 through Octave 5; it’s as if the whole thing slid down an octave toward the left side of the piano. The opposite would occur if you hit the ‘Octave Up’ button.

Many keyboards will let you transpose the keyboard several octaves in either direction, which would allow you, for instance, to play ultrasonic music that only small rodents can hear, to your heart’s content.

Having octave buttons eliminates the need for a huge space-hogging keyboard with all 88 keys, yet we can still reach all of the keys when we need them. And without octave buttons, 25-key keyboards would be pretty useless!

However, octave buttons won’t really work so well if you need to switch them right in the middle of a piece. Classical piano is challenging enough without the additional problem of having to press an octave button at exactly the right second to transpose the keyboard. One possible solution is to use a midi foot pedal that would allow us to switch octaves by pressing the pedal, allowing us to keep our hands on the keys. However, the best bet for classical piano enthusiasts is definitely to use an 88 key keyboard, or at the minimum 76.

Test your knowledge of this lesson on octave registers:

You have already completed the quiz before. Hence you can not start it again.

You have to finish following quiz, to start this quiz: